A world in hunger: east Africa and beyond

The severe drought across much of east Africa is a human emergency that requires urgent attention. It also signals a global crisis: the convergence of inequality, food insecurity and climate change. 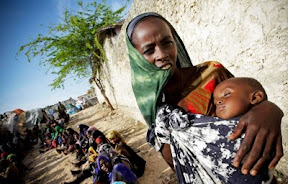 A drought across much of east Africa in mid-2011 is causing intense distress among vulnerable populations, many of them already pressed by poverty and insecurity. The range of the affected areas is extensive: the two districts in Somalia that are now designated as famine-zones are but the most extreme parts of a much wider disaster that stretches from Somalia across Ethiopia into northern Kenya, and as far west as Sudan and even the Karamoja district in northeast Uganda.

The numbers put at risk in this, the worst drought in the region since the 1950s, are enormous. At least 11 million people are touched by the disaster. In the Turkana district of northern Kenya, 385,000 children (among a total population of about 850,000) are suffering from acute malnutrition (see Miriam Gathigah, “East Africa: Millions Stare Death in the Face Amidst Ravaging Drought”, TerraViva / IPS, 18 July 2011). In Somalia, the conflict between the Islamist Shabaab movement and the nominal government makes conditions even more perilous for those affected.

The world's largest refugee camp, at Dadaab in northern Kenya, offers a stark illustration of the consequences of the drought. The population of Dadaab, which was designed to cope with 90,000 people, has increased in recent months to 380,000 - and 1,300 more are arriving daily (see Denis Foynes, “Eleven Million at Risk in Horn of Africa”, TerraViva / IPS, 19 July 2011).

The lessons of crisis

But just as striking is that this is part of a recurring phenomenon. Major warning-signs of malnutrition and famine were already visible in April 2008; among them were climatic factors, steep oil-price increases, increased demand for meat diets by richer communities, and the diversion of land to grow biofuel crops (see “The world’s food insecurity”, 24 April 2008).
More >>>