The record-breaking heat may be easing across much of North America, but the dramatic markers of our fast-changing climate continue unabated. 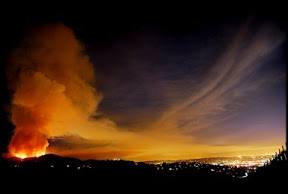 In a summer where much of the continent has sweltered under epic heat and humidity, it is not surprising that forest fires are on the rise. A new study in the Proceedings of the National Academies of Sciences reveals that Yellowstone National Park and the Grand Tetons are far more likely to experience large fires more frequently.

According to Discovery Science, researchers used established climate models and compared climate conditions, fire frequency, temperature changes and precipitation levels. From this they determined that within just a few decades, big fires may become as much as 10 times more common than they have been in the last 10,000 years—likely once every 20 to 30 years.

This study helps explain what people who live in the West have begun to notice in recent years, said Terry Chapin, an ecosystem ecologist who studies the effects of climate change on wildfires at the University of Alaska, Fairbanks. Serious wildfires seem to be happening more often than they used to, he said.

“That’s something the United States has not come to grips with, with respect to climate change: We assume that either climate change doesn’t happen or that we can manage things such that climate change won’t affect us,” Chapin said. “This seems like a clear and present example where recent and projected changes in climate are going to have a huge impact on human society. We need to adjust and adapt rather than try to fix the symptoms.” More >>>