The decline of agriculture? 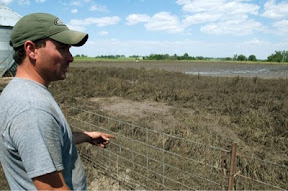 Wendy Johnston with Oakwyn Farms in Athens, West Virginia, is deeply concerned about how shifting weather patterns are impacting farmers’ ability to feed the global population.

“This year we’re off to a slow start,” Johnston, who farms 40 hectares, told Al Jazeera. “Last year in April we were able to plant, but this year we even had rain, cold and snow a few days in April. The weather has become very unpredictable, and that’s the real problem.”

Climate change is making farming more difficult for her, and she wonders how much worse things will become.

On March 31, The Food and Agriculture Organisation (FAO) warned of “potentially catastrophic” impacts on food production from slow-onset climate changes that are expected to increasingly hit the developing world. The report filed with the United Nations Framework Convention on Climate Change, warned that food production systems and the ecosystems they depend on are highly sensitive to climate variability and change. Changes in temperature, precipitation, and related outbreaks of pest and diseases could reduce production, the report said. Those particularly vulnerable are poor people in countries that rely on food imports, although climate change events are already driving up food costs around the globe, including in developed countries. April broke many weather-related monthly records in the US, including 292 tornadoes and 5,400 extreme weather events, which combined to cause 337 deaths.

The US National Climatic Data Center announced in June that April’s weather extremes were “unprecedented” and “never before” seen in a single month. The center also noted drought across the southern plains, wildfires in the southwest, and record floods along the Mississippi River. Full Article >>>