Will North America Be the New Middle East?

The climate problem has moved from the abstract to the very real in the last 18 months. 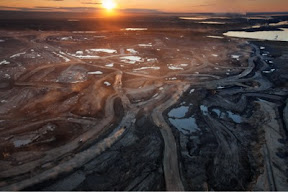 Instead of charts and graphs about what will happen someday, we’ve got real-time video: first Russia burning, then Texas and Arizona on fire. First Pakistan suffered a deluge, then Queensland, Australia, went underwater, and this spring and summer, it’s the Midwest that’s flooding at historic levels.

The year 2010 saw the lowest volume of Arctic ice since scientists started to measure, more rainfall on land than any year in recorded history, and the lowest barometric pressure ever registered in the continental United States. Measured on a planetary scale, 2010 tied 2005 as the warmest year in history. Jeff Masters, probably the world’s most widely read meteorologist, calculated that the year featured the most extreme weather since at least 1816, when a giant volcano blew its top.

Since we’re the volcano now, and likely to keep blowing, here’s his prognosis: “The ever-increasing amounts of heat-trapping gases humans are emitting into the air put tremendous pressure on the climate system to shift to a new, radically different, warmer state, and the extreme weather of 2010-2011 suggests that the transition is already well underway.”

If you could burn all the oil in those tar sands, you’d run the atmosphere’s concentration of carbon dioxide from its current 390 parts per million (enough to cause the climate havoc we’re currently seeing) to nearly 600 parts per million, which would mean if not hell, then at least a world with a similar temperature. It won’t happen overnight, thank God, but according to the planet’s most important climatologist, James Hansen, burning even a substantial portion of that oil would mean it was “essentially game over” for the climate of this planet. More >>>