ScienceDaily (July 20, 2011) — Until recently, scientists were uncertain about how much and where in the world terrestrial carbon is being stored. In the July 14 issue of Science Express, scientists report that, between 1990 and 2007, the world's forests stored about 2.4 gigatons of carbon per year. 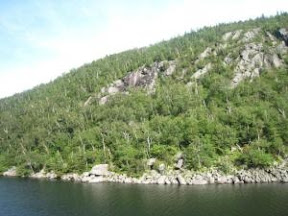 Their results suggest that forests account for almost all of the world's land-based carbon uptake. Boreal forests are estimated to be responsible for 22 percent of the carbon stored in the forests. A warming climate has the potential to increase fires and insect damage in the boreal forest and reduce its capacity to sequester carbon.

"Our results imply that clearly, forests play a critical role in Earth's terrestrial carbon balance, and exert considerable control over the evolution of atmospheric carbon dioxide," said A. David McGuire, co-author and professor of ecology at the University of Alaska Fairbanks Institute of Arctic Biology and co-leader of the USGS Alaska Cooperative Fish and Wildlife Research Unit.

The report includes comprehensive estimates of carbon for the world's forests based on recent inventory data. The scientists included information on changes in carbon pools from dead wood, harvested wood products, living plants and plant litter, and soils to estimate changes in carbon across countries, regions and continents that represent boreal, temperate and tropical forests.

The authors note that understanding the present and future role of forests in the sequestration and emission of carbon is essential for informed discussions on limiting greenhouse gases. More >>>