ScienceDaily (July 15, 2011) — Dramatic climate swings behind both last year's Pakistan flooding and this year's Queensland floods in Australia are likely to continue as the world gets warmer, scientists predict. 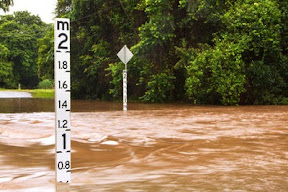 Researchers at the Universities of Oxford and Leeds have discovered that the El Niño Southern Oscillation (ENSO), the sloshing of the warmest waters on the planet from the West Pacific towards the East Pacific every 2-7 years, continued during Earth's last great warm period, the Pliocene.

Their results suggest that swings between the two climatic extremes, known as El Niño and La Niña, may even have occurred more frequently in the warmer past and may increase in frequency in the future. Extreme ENSO events cause droughts, forest fires and floods across much of the world as well as affecting fishery production.

Reporting in the journal Paleoceanography, the team of geochemists and climate modellers use the Pliocene as a past analogue and predictor of the workings of Earth's future climate. More >>>