Warming of the ocean's subsurface layers will melt underwater portions of the Greenland and Antarctic ice sheets faster than previously thought, according to new University of Arizona-led research. Such melting would increase the sea level more than already projected. 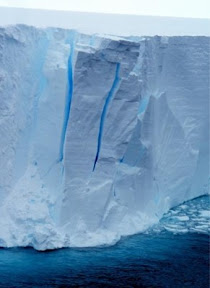 The research, based on 19 state-of-the-art climate models, proposes a new mechanism by which global warming will accelerate the melting of the great ice sheets during this century and the next.

The subsurface ocean layers surrounding the polar ice sheets will warm substantially as global warming progresses, the scientists found. In addition to being exposed to warming air, underwater portions of the polar ice sheets and glaciers will be bathed in warming seawater.

"To my knowledge, this study is the first to quantify and compare future ocean warming around the Greenland and the Antarctic ice sheets using an ensemble of models," said lead author Jianjun Yin, a UA assistant professor of geosciences.

Most previous research has focused on how increases in atmospheric temperatures would affect the ice sheets, he said.