Why water security is one of the greatest challenges of the twenty-first century, and why water politics have just got more complicated. 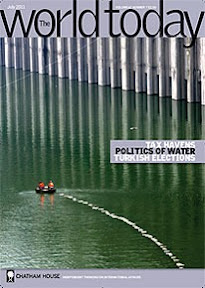 Water is the most essential and most awkward of natural resources. It has no substitutes, but many uses - as drinking water, for sanitation purposes, in agriculture, in industrial processes, in electricity generation. Water's versatility makes it coveted by many different consumers, each with their own needs and political heft.

Sometimes water ends up not being water at all: it becomes an input to agricultural production or energy or, in the case of bio-fuels, both. In hydraulic fracturing, water is key to the extraction of natural gas. Elsewhere, it is needed to cool power stations. In southern Mongolia's bone-dry Gobi, water is needed for the region's huge mineral wealth to be developed.

Sometimes, the process works the other way, and huge amounts of energy and wealth are used to provide water. In California, it is the State Water Project, transporting water to southern California, that is the single largest user of electricity. In Saudi Arabia, up to 1.5 million barrels of oil per day are used to desalinate and pump the country's water.

Water's usability depends not only on sheer quantity, but also on quality and type. Water's most common form - ocean saltwater - is its least directly useful (though advocates of large-scale desalinisation and salt-water farming have long promised that could change).

The availability of water in both necessary quantity and quality depends, in part, on geography. Despite the overall global abundance of water, over one billion people live in water-scarce or water stressed parts of the world, a number expected to triple over the next few decades as groundwater depletion, climate change and accelerating demands on water extraction take their toll. Globally, the Water Resources Group has defined a forty percent gap between projected water requirements in 2030 and current accessible and reliable supply. In some places, the gap is much greater.
Full Article >>>