ScienceDaily (Sep. 29, 2011) — Coral reefs that have lots of corals and appear healthy may, in fact, be heading toward collapse, according to a study published by the Wildlife Conservation Society and other groups. 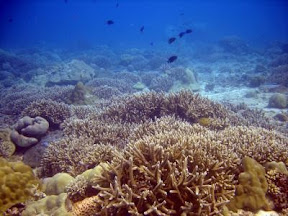 Using data from coral reef systems across the western Indian Ocean, an international team of researchers identified how overfishing creates a series of at least eight big changes on reefs that precipitate a final collapse. This information can help managers gauge the health of a reef and tell them when to restrict fishing in order to avoid a collapse of the ecosystem and fishery.

The study appears this week in the early online edition of the Proceedings of the National Academy of Sciences. The authors of the study include: Tim R. McClanahan and Nyawira A. Muthiga of the Wildlife Conservation Society; Nicholas A.J. Graham and Joshua E. Cinner of James Cook University, Queensland, Australia; M. Aaron MacNeil of the Australian Institute of Marine Science; J. Henrich Bruggemann of Laboratoire d’Ecologie Marine, Université de la Réunion, La Réunion, France; and Shaun K. Wilson of the Department of Environment and Conservation, Perth, Western Australia. More >>>