Where is the human race heading? What does our future hold? 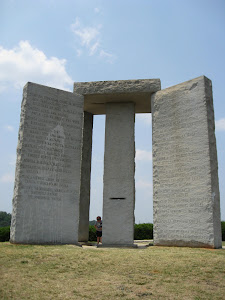 The Georgia Guidestones is a granite monument in Elbert County, Georgia, USA. A message clearly conveying a set of ten guidelines is inscribed on the structure in eight modern languages, and a shorter message is inscribed at the top of the structure in four ancient languages' scripts: Babylonian, Classical Greek, Sanskrit and Egyptian hieroglyphs. 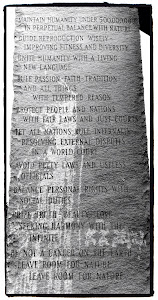 The structure is sometimes referred to as an "American Stonehenge."[1] The monument is 19 feet 3 inches (5.87 m) tall, made from six granite slabs weighing 237,746 pounds (107,840 kg) in all.[2] One slab stands in the center, with four arranged around it. A capstone lies on top of the five slabs, which are astronomically aligned. An additional stone tablet, which is set in the ground a short distance to the west of the structure, provides some notes on the history and purpose of the Guidestones.

The Inscriptions - Photo opposite

A message consisting of a set of ten guidelines or principles is engraved on the Georgia Guidestones in eight different languages, one language on each face of the four large upright stones (see photograph of the face with the English version right). Moving clockwise around the structure from due north, these languages are: English, Spanish, Swahili, Hindi, Hebrew, Arabic, Chinese and Russian.

The four outer stones are oriented to mark the limits of the 18.6 year lunar declination cycle.[4] The center column features a hole through which the North Star can be seen regardless of time, as well as a slot that is aligned with the Sun's solstices and equinoxes. A 7/8" aperture in the capstone allows a ray of sun to pass through at noon each day, shining a beam on the center stone indicating the day of the year.[2]

According to the 2009 Wired magazine article 'What's most widely agreed upon—based on the evidence available—is that the Guidestones are meant to instruct the dazed survivors of some impending apocalypse as they attempt to reconstitute civilization'.

The questions that must be asked however, is whether, driven by the repacious corporate multinationals, we will consume the planet's finite resources to supply the constantly growing population? Should we be planning a sustainable future? Should we be trying to control population? Scarce resources? Should we be enhancing food security and doing away with GMO's? What about water security? We should also continue to do away with Weapons of Mass Destruction, both nuclear, chemical and biological. We need to do these things now while we have a breathing space.

Can we do these things or are we on a course of self destruction?